What I Learned About Myself Through Meditation

It’s no secret that I’ve got serious anxiety issues. That’s been established for a long time, which is why I’ve been a chronic self medicator up until very recently (and it can be argued that I still am, only my medication is hours of low effort exercise). I suppose everybody self medicates with something, but to what extent and whether or not it’s healthy is debatable. There’s no debate with my self medication. It was pure insanity.

But back to my anxiety. I tried every imaginable remedy to “cure” my ailment, and my anxiety was debilitating, paranoid, “can’t get out of bed” type of anxiety. Nothing really worked until I worked to improve my mind and spirit. Part of this improvement included (among a lot of outside help) the incorporation of meditation into my daily life.

I had tried meditation in the past, and what I couldn’t overcome was the fact that I couldn’t fully rest my mind. I felt I was a failure at it, and so I quit, like many of us do. Here were some of the reasons I didn’t “get” meditation.

Aside from most of this list being silly, it is clear that I didn’t understand what I wanted out of meditation, or rather, I set my expectations to high for it to work. Thus I stopped doing it and said it didn’t work for me.
Within the last couple years I revisited meditation with the intent of being open minded to what I would get from it. First, I set it up as an exercise in failure and adaptation. Every day meditation would be different. Some days I would be fully energized, some days I would be antsy, others I would be calm, etc. I simply accepted this and moved on. The important thing was that I immediately intended to give up control of my thoughts. Let them flow, and let them be what they may.
Second, I approached meditation with the new intent that I would listen rather than participate. My only job was to listen to my thoughts, not become a part of them. This is an important concept because I learned that you can’t (nor should you want to) shut down your mind. That would essentially kill you. Shutting down your mind implies that you have some control over that action. Once you let go of that control you begin to accept things that are out of your control. At that point you can become a spectator as thoughts float through your mind. This acceptance begins to lead to a better understanding of how you think, and thus you learn to find peace with yourself (inner peace).
There is a guided meditation app called Headspace, which I learned about from the Tim Ferris Podcast (Author of  The 4 Hour Workweek, The 4 Hour Body), which actually describes part of this concept very well. It tells us that our mind acts like a highway, with cars (thoughts) constantly speeding by. We are simply on the side of the road watching the cars drive past. Our job in this exercise is to simply watch the cars drive past without jumping into a car and going for a ride (or trying to drive the car).
When I first heard this, I immediately related and knew that’s how my brain worked. So I got to meditating and waited for the cars to pass by. I initially thought that my mind would be the equivalent of LA traffic during the apocalypse. What I realized instead was that the traffic in my head was actually very light, but the traffic that did come by were over sized tractor trailers hell bent on running me down. Thus for every thought that came my way it was hard for me not to jump on board. Some days the traffic of tractor trailers was light, and some days it was heavy, but the common theme was that I would have to work hard not to get run down by the semi.
I tend to think that because I am prone to jump on every thought that comes through my head, even when the traffic is light, this translates into obsession in the real world. These thoughts become obsessions, and the heavier the traffic becomes in my head, the greater anxiety I have (mental overload).
Once I learned this about myself, meditation became much easier. Since I discovered the real way my brain worked (which was different from what I originally thought), I could accept that and sit on the sidelines more easily. I could learn to gradually allow the tractor trailers to drive by without me jumping on. This was a great revelation to me, and really helped me enjoy meditation and get the most out of it.
I put aside all of my preconceptions about meditation as laid out in the above list, and focused on what worked for me, since everyone is different.
In the greatest sense, what I learned from meditation was a lot about how my mind worked. And once I knew how my mind worked, it became easier to let go and allow the mind to quiet itself as I sat on the sidelines. That mediation is not a perfect exercise, it is a practice in failure, something, I am proud to say, I am pretty good at.
Like this post? Share it with your friends!
Share List

As this season draws to a close, I look forward to a few weeks of recovery and a few months of base-level maintenance training as I gear up for 2015. It’s also a time to reflect on this last year of racing, which has really been two seasons rolled into one. When I first began training, I was overly optimistic about my season. I began training in February, 2013 on the heels of a major shoulder surgery, started racing my first triathlons in July, did my first 70.3 in December, and then immediately started my build to my first Ironman in Cabo in March, 2014. The fun didn’t stop there, as I quickly began setting my sights on Ironman Boulder in August, with a handful of races in between.

I proceeded to race an Olympic triathlon in San Diego a month later, and definitely felt the effects of my recovery from Boulder. My final race of the season(s) is Ironman Silverman 70.3, which takes place on October 5, and should not be taken lightly. Unpredictable weather (likely heat), no wetsuits, and endless climbing await me there. But after that? Recovery.

That’s a year and a half of constant high volume training, which isn’t necessarily the smartest thing for an elite athlete, let alone an amateur starting from zero. But I wouldn’t have done it any other way. I set out to accomplish something I had no business participating in while in my particular state of physical health and injury. But huge transformations can happen quickly with the right motivation, willingness, and care. 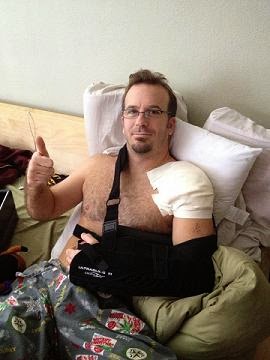 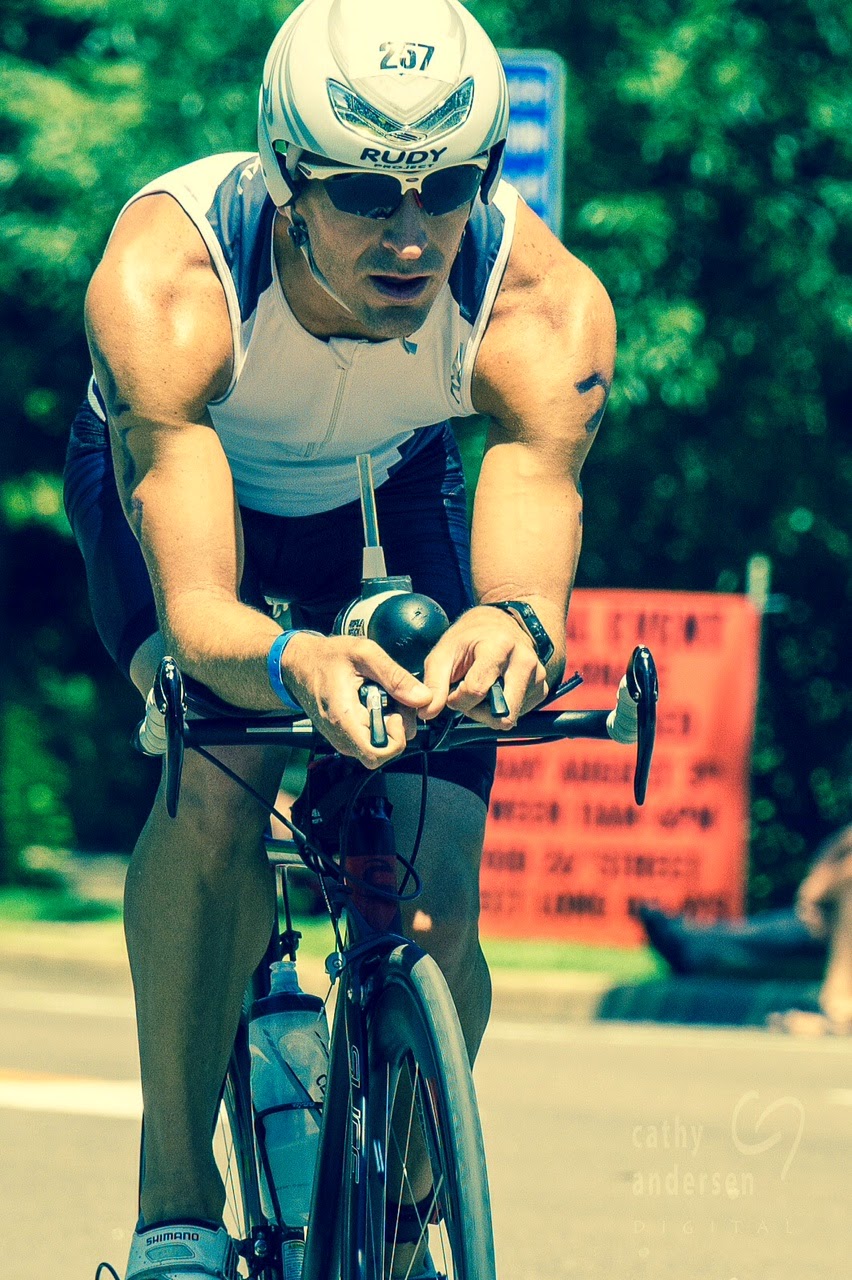 Right: After my surgery, right before my decision to race in an Ironman
Left: During my second Ironman in Boulder a year and a half later

From there I became an Ironman finisher 2 times over, both in under 11 hours. The ridiculous “dream” of becoming a qualifier for the Ironman World Championship suddenly became a realistic “goal”. With the guidance of top coaches at MarkAllenOnline (now doing business as Smart Triathlon Training), I was able to exceed my expectations and turn distant dreams into realistic goals. Below I am posting a picture of a trendline from 2013 when I first started this training. I was so happy that my paces were improving, but they were still slow at my aerobic heart rate. With patience, I was able to bring my paces down even more, and hold those paces for over 20 miles of running (all at a relatively easy pace). On a good day, my long runs can be between 7:45 and 8:00 miles. 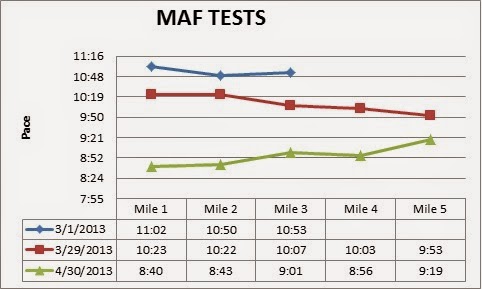 So now the question becomes “why stop now? You have the momentum to continue pushing to even greater results?” First of all, I’m not stopping after Silverman. I have goals to exceed for 2015. But before 2014 is out, I am going to spend the bulk of my training time maintaining my fitness, recovering from a year and a half of racing, and focusing on techniques I’d previously rushed through so that when I reach the time that I have to build for my next event, I am prepared to crush it.

All of this is to avoid burnout. It is possible to overtrain to the point that you are doing more harm than good, and then you are under prepared for a race. The results start to suffer, the frustration sets in, and the motivation wanes. Mark Allen drives the point home, “Over prepare, under train”.

As I sit here writing this post about my own need to step back my training, I am feeling less and less anxious about other decisions my family has made recently. For example, our daughter has become burned out on piano, and we have really struggled with trying to rekindle her passion. Finally, we decided that maybe it is best for her to take a break, a very difficult decision for us. Our daughter’s teacher was not happy with this at all, and pleaded with us to reconsider, making us feel tremendously more guilty for our decision. But as I think about my own training, I remember that, like my training, we are not quitting, we are simply maintaining a “base” level of fitness for when the time comes to rebuild. Then the passion will be rekindled. Secondly, it is literally a marathon, not a sprint. Healthy habits are sparked by a healthy body, mind, and soul. If you push one too hard, the others will suffer. But all three in balance will produce tremendous results.

This season is nearly done, and I am looking forward to the break, to recover my body, mind, and soul. These last couple years have been about becoming healthier, finding passion in life, and inspiring others to do the same, while writing about my experience as it happens. I am tremendously joyful for what I have accomplished during this time, and my life is much better for it. Furthermore, I look forward to the coming year, where I take these steps to the next level, to achieve goals that were once dreams, and to dream bigger for the future!

To see my race schedule for next year, please visit my new website at www.adamhilltri.com