Ironman Boise 2014 Race Report, and a Search for Sushi Amongst the Strip Clubs

Let me just preface by saying that we visited neither a sushi restaurant or a strip club. But more on that later.

I didn’t really know what to expect coming to Boise… Scratch that, I kinda did. My flight over which was filled with triathletes sitting next to large bearded men in suspenders and flannel pretty much confirmed my suspicions. However, what I DIDN’T know what to expect was with regard to the conditions come race day. Two years ago it was really cold. Last year it was really hot. Every year it is really windy. I was hoping for a Goldilocks effect of “just right”.

This was the first time flying with my Ruster Sports Armored Hen House, and I have to say that I was tremendously nervous about flying with my trusty steed packed up and at the mercy of the TSA and baggage brutes. But after disassembling the bike and seeing how secure it seemed in the case, it was clear that unless the TSA or baggage brutes did anything malicious (gulp) it would be okay. Sure enough when I arrived in Boise, there it was waiting for me in one piece. Well, at least not in any more pieces than I had disassembled it into. I was very impressed with how it performed, and will write up a product feature on it soon.

The morning before the race I loaded my bike up and went down to the expo to check in and I thought I would have the on-site bike mechanic evaluate my bike reassembly skills. You see, I’m pretty confident I did okay, and likely would have foregone the professional bike check if it were a flat course. But considering that right out of T1 we would be going into a blazing fast descent, I thought it to be better safe than sorry, lest this happen to me.

All systems were go, and I dropped off my bike at Lucky Peak in T1 for a slumber party with 1400 of its friends. Then my wife and I were off to enjoy our pre-race dinner ritual, sushi! Now, sushi in Boise. Our first mistake was to try to make that combination work. Don’t get me wrong, I’m sure that there are plenty of good sushi places in Boise. But at 6 pm on a Friday night without knowing the area, this is a decision you do not want to rush. So we honed our Yelping skills and drove by a number of supposedly “decent” places only to find they were all in less than stellar areas. The last one we went to was across the street from two strip clubs, and adjacent to a used car lot called “Fairly Reliable Bob’s” (no joke). We decided to skip sushi this time around. We ate elsewhere and went back to the hotel to sleep.

This was the first time I was able to wake up with the sun shining on race morning. All other races tend to start around first hint of corona over the horizon, but this race starts at high noon. And being a wave start, I wouldn’t go off until high noon thirty. Many people praise the late start as a way to get a full night sleep, sleep in, and eat a full breakfast. I couldn’t disagree more. First off, I like to get my suffering going as early as possible. It adds to the experience. Second, I don’t find it wise to go into a race with a full belly of complete breakfast. I opted to go with my usual, and have a shake for breakfast and some quinoa and oatmeal a couple hours before the start.
My goal for this race? I wanted to go under 5 hours, specifically do about a 2:30 bike split and maintain a run pace of about 7:15-7:20. This would have proven for me some significant fitness gains since my last half. Since this was a hillier bike course than Palm Springs, even if I had the same bike split I would have considered that an improvement. Additionally, I wanted to see how I fared with a little altitude (Boise being at about 3,000 ft). The course would likely be a good practice for Boulder.
We were bussed up to Lucky Peak Reservoir for the swim start. 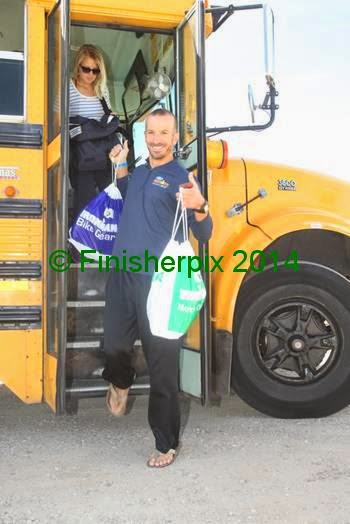 It was a beautiful view as the pictures will demonstrate below.
Swim: 38:41, 58/194 in AG, 399/1435 Overall – Man, I need a swim coach!
Our wave, the 35-39 male age group, was the 8th wave to go off, so there would be plenty of traffic on the course by the time we got out there. Unfortunately, we had no time for a warm up, so immediately when we got in the water I started bobbing my head in and out to get my face used to the water and through the panic of the cold. Fortunately it wasn’t as cold as it was in previous years, only about 60 degrees (I’d heard stories of it being in the low 50’s).
The gun went off and we all started swimming, and I started feeling relatively comfortable pretty quickly. I began to feel a good rhythm, and fell into a pack of swimmers I felt was going a comfortable speed. Tempo still felt high, so I thought I was pushing the effort pretty well. I also took this opportunity to practice my drafting skills. I would find a swimmer that would pass me and jump in behind him and lighten my effort. It seemed to work pretty well over the course of the swim.
Rounding the first turn buoy, it became harder to swim with forward progress. It felt like the current was against us, which was probably correct, since the wind was pushing at our faces. I began to swallow a lot of water because I was breathing out of my right side, which was where the wind was coming from. At about the third turn buoy, I began to get pretty bad cramps in my calves. This had never happened to me in the water before and was quite unnerving, since I could no longer straighten or bend my foot. It just sat there like a painful brick in the water. I did my best to try to work it out and swim on, but it continued to persist. Right as we hit the dock, with about 20 meters to go, it seized up really bad and I sat there floating right at the end of the swim, unable to move, while trying to stretch out my calf. I dog paddled the rest of the way to the swim exit, and stood up, fully expecting to fall down again in a heap of uselessness. To my surprise, all systems were working properly, albeit a bit sore. Despite the hiccups, I was expecting to see a swim time of 38 minutes, and that is exactly what I got. Still a little disappointed that I haven’t had any improvement since my last half in December (hence the comment above – I really need a swim coach!).
Transition 1: 3:16
There was a bit of a hill running from the swim exit to transition, and naturally my heart rate reflected the shock of moving from upper body to lower body activity. I bypassed the wetsuit strippers, as I couldn’t justify them saving me any time, and continued on to my bike. I’m sure I could have gone faster, but I still haven’t mastered the art of the “clean transition”. This requires that all swim items be put into the bike bag, and I am still pretty slow at that task. But, I grabbed my bike and headed out.
Bike: 2:32:17, 22.06 mph avg., 20/194 in AG, 114/1435 Overall 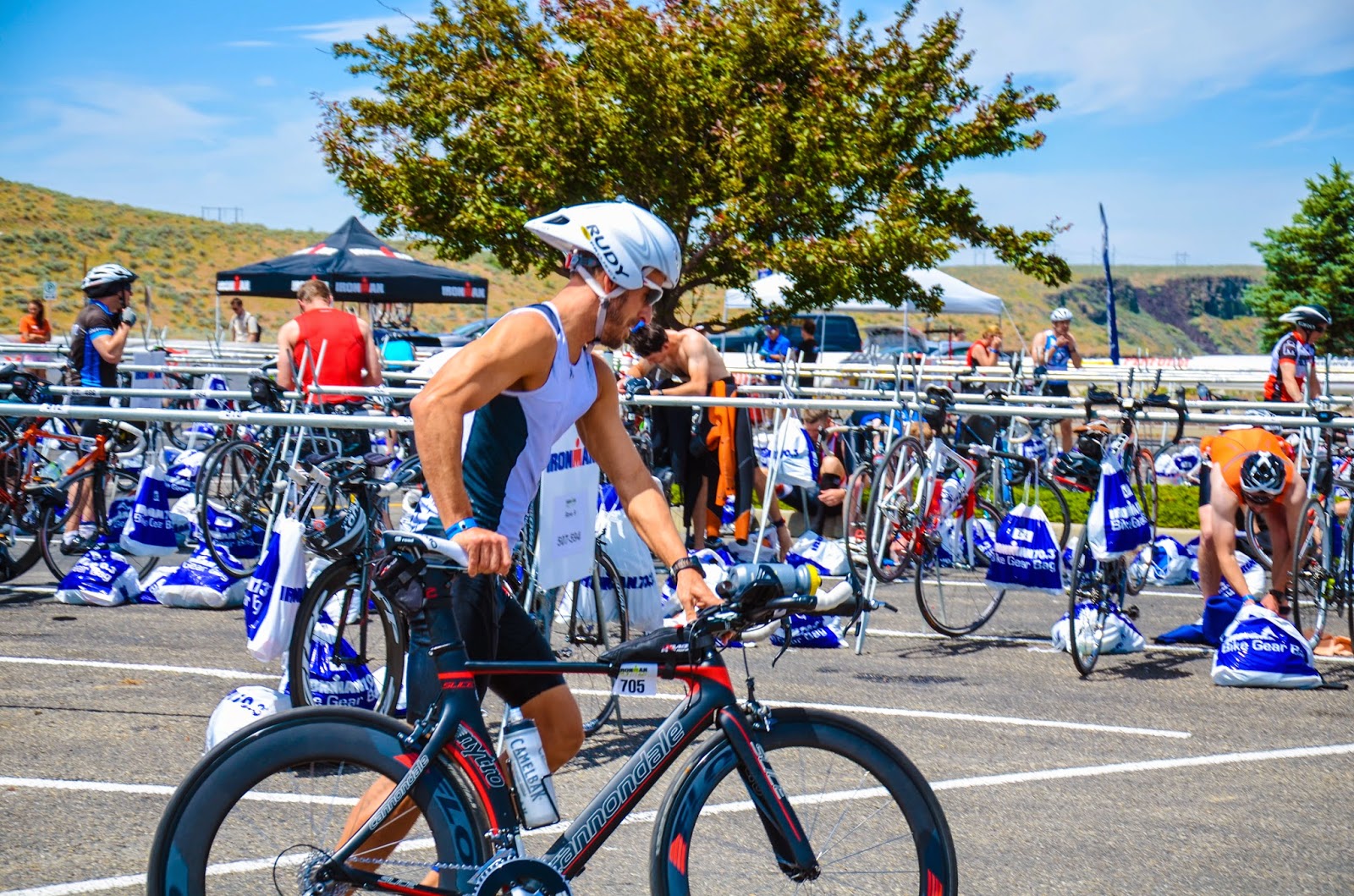 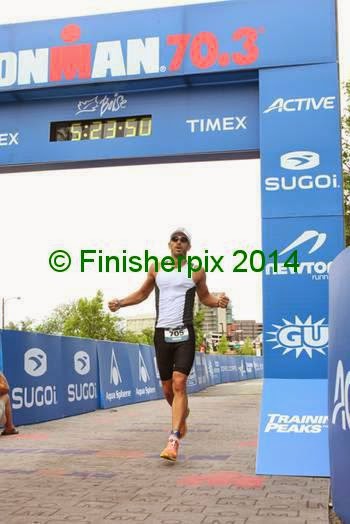 Garmin File
Post Race:
The grassy area outside of the finish line looked like a war zone medical tent, where the wounded soldiers were clad in Lycra rather than camouflage. A lot of people, more so than Cabo, were woozy and laid out on the grass trying to collect themselves. A lot of people seemed to put it all out there, including myself. I was one of those laying on the grass, trying to decide if horizontal or vertical was the better position to avoid puking or passing out. Eventually I came around and got a massage (more props to the volunteers who freely gave of themselves to touch numbers of sweaty triathletes after a 5 hour race). Then I heard the 5 greatest words you can possibly hear after a long triathlon, “They have burgers over there”.
You have to love a race that is sponsored by “Beef”. Yes, “Beef”. While I tend to stick to fish and eggs as animal protein during training, post race it’s all about red meat and gluttony. I’m sure many vegans didn’t appreciate this, but I sure did. It was awesome to have a couple of free burgers and beef jerky at the end of the race.
We had to fly home early the next morning, which meant that I had to get back to the hotel and disassemble my bike and pack it up. That I did, and once again my bike made it safely home without incident. One more successful race!
Like this post? Share it with your friends!
Share List