During the 2015 triathlon season, my goal was put everything I could into training and achieve the best possible result. I put in heavy training volume, maxing out at nearly 25 hours per week, getting in as much as I could without collapsing. Unfortunately, volume alone had a detrimental effect on my racing, and I very quickly burned out leading up to my second Ironman in Boulder.

Thus, I switched gears to focus on recovery this year. I cut back on the volume of training, and made the training I was doing more high quality. Easy workouts were very easy, and hard workouts were very hard. I made sure that I was getting adequate sleep every night. Additionally I began to incorporate more technology into my recovery cycle.

One of those technologies is recovery boots. There are many versions, the most popular of which is the Normatec Recovery Boots. I love my boots. They do wonders for helping my legs recover after workouts, and they are also great to use before a workout or race. The compression technology maximizes fluid flow through the legs, and speeds up recovery. Despite the apparent benefits of having “fresher” legs, I still felt there were limitations, and I wasn’t getting the most benefit that I could. First of all, it only works on the legs up to the glutes (unless you purchase an extension that I haven’t used). This neglects a highly overused part of the body for runners and cyclists. Additionally, muscle tightness and soreness persisted, since compression is not targeted, and doesn’t get deep into the tissue.

Enter the Rapid Release Technology. I would be lying if I said that I “discovered” this product, since I came across this quite by accident (as I pointed out in my previous post – Two Secrets to a Huge PR). It was not my intention to visit my massage therapist before Ironman Vineman. I knew from past experience that any relief I would get from a massage would be quickly reversed from the high level of stress and activity involved in traveling to the race venue, going through the check in process, and getting some final workouts in. I had resigned to the fact that I would hit the start line with some muscle fatigue and tightness, and likely a massage a few days prior would not help much. Surely everyone experienced it, so it was an even playing field.

After much cajoling from my wife, I decided it couldn’t hurt to pay her a visit anyway, and I made an appointment for the day before heading up to Vineman. My expectation was that she would give me traditional full body sports massage. The smell of lavender and sage would fill the air, candles would be lit, and a little Kenny G would be playing lightly in the background as she reprimanded me for letting my trouble spots get so bad. I, in turn, would weep silently as she lay elbow deep into one of my pressure points.

As I walked in and laid face down on the table, I heard no Kenny G, saw no candles, and… well, the smell of lavender still filled the air. Instead of silence, I heard behind me the ominous buzzing of the Rapid Release unit (RRT). I had no clue what it looked like, since my face was buried in a donut shaped head rest, but I pictured a contraption similar to a modified chainsaw used in a horror flick as I prepared for the torture that I was about to endure. I wondered what I had got myself into.

As I braced for the pain that was to come, I was surprised to meet with a warm and pleasant vibration on my upper back. It felt nothing like the chainsaw of death that I was expecting, in fact it felt incredibly relaxing. Muscles that I thought were already “loose” became much looser. The general feeling of tightness and slight soreness/cramping that existed in my muscles went away with just a little pressure from the RRT. It is as if the unit was a “muscle whisperer”, commanding each muscle group to obey – and obey they did.

As the therapist worked over my arms, she stopped and told me she wanted to show me something cool. She asked me to make a really hard fist with my right hand, and so I complied, folding my fingers into as tight a fist as hard as I could. She then proceeded to use the RRT on my hand, outside and inside for about 30 seconds. Then she asked me to make a fist again.

The difference was astonishing. I thought I had made a tight fist before, but the first one felt exceptionally weak in comparison to the one I was making now. When I made a fist with both hands (the right hand having had the treatment, the left hand not), the difference became abundantly clear. The muscles working in my hands after the treatment were clearly much stronger than they had been before. 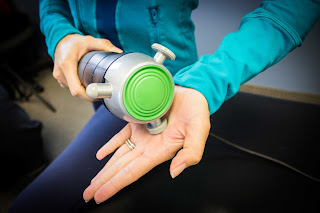 After she worked over my whole body, I felt the buzz all throughout my muscles. Everything was totally relaxed. Areas that I didn’t realize were tight had completely released.

After telling her how relaxed I felt, and how any and all soreness had left me, she explained the technology to me. Through the use of high frequency vibration, the RRT triggers neurological reflexes the muscles, specifically those that are prone to cramping and spasm. When the activators are placed on the tight muscle, it is absorbed and rapidly loosens.

The immediate effects are readily apparent. Significantly reduced muscle pain, cramping, and tightness. Positive effects on performance are realized during exercise and competition as well. In a nutshell, muscles need oxygen to perform. Blood carries oxygen to the muscles. Tight muscles restrict blood flow, and therefore limit the amount of oxygen going to the muscles. Completely relaxed and loose muscles allow complete oxygen saturation, which in turn improves efficiency of oxygen transport through the muscles. The result is improved performance.

This all sounded great in theory, but I wouldn’t know if it was going to work until my race, which was still a few days away, and until then I still had a lot of moving around to do. I was concerned that all of this activity would eliminate any of the benefits that I had gained from the RRT.

In a move of exceptional kindness and trust, my massage therapist invited me to borrow the RRT for my race, with the instruction to use it after the drive up to Sonoma where Ironman Vineman was to be held (about a 10 hour drive), and the night before the race. I enthusiastically accepted!

Many people don’t realize how much activity takes place before an Ironman. Athletes do their best to rest before the event, but traveling to the race, checking in, doing some last minute exercises, and checking the bike and run gear really can take a lot out of the athlete’s muscles, and even cause soreness. This is certainly true for me, and I have struggled with this at every race in which I’ve competed. It never fails that the morning of the race I wake up with lingering soreness in my calves and shins due to all the activity, and I can tell that it is detrimental to a solid race performance.

I did as I was instructed, and used the RRT the night I arrived in Sonoma, and the night before the race. One of the greatest side effects it offered was that each time I was able to fall right asleep. This never happens the night before an Ironman!

I woke up the day of the race with completely fresh legs. I have never felt more ready or relaxed before a race. I can not concisely put into words how well this race went for me (if you would like to read the long version of the report, you can find it here). Historically in the Ironman races, I have always biked very well, with bike splits consistently in the top 5 in my age group, but it has always been the run where I fall apart. I have found it hard to get my legs moving, I begin cramping, and I simply fatigue and have to walk frequently to make it to the finish, all the while getting passed by many people in my age group. Demoralizing to say the least.

At this race, however, this was not the case. I was able to hold my pace for the entire marathon. I didn’t lose ground, and I finished in a solid 6th place in my age group out of more than 200 athletes. I finished as the 23rd amateur in a field of over 2,000 athletes, and I beat my long term goal of finishing an Ironman in under 10 hours (on a challenging course, to boot!).

For this solid run performance, I owe much credit to being completely loose prior to the race. It wasn’t just the kind of loosening up you get from a warm up or stretching. It was a looseness that was felt deep in my entire body. Complete recovery and relaxation. It was clear that my body was functioning as effectively as possible because it was not being derailed by soreness, cramping, or fatigue. All thanks to the Rapid Release Technology.

Some of the dramatic benefits I found with using the RRT include the following:

When I returned from Sonoma, I was plotting ways not to part with the RRT. Perhaps I could escape to Mexico, just me and the machine, to spend the rest of our days running on the beach with fresh legs! But alas, my integrity got the best of me, and I parted with it. Not before committing to visit once and a while to get total relaxation.

If you would like more information on the Rapid Release Technology, please visit their website at www.rapidreleasetech.com.

Two Secrets to a Huge PR