Now on to the more detailed report.

I continue to be amazed by the sport of Ironman triathlon. Despite all the races that I have done, both 70.3 and full distance, there is the occasional race that comes along where I enter race morning brimming with confidence only to be humbled by the torturous course and betrayed by my own mind.

I really can’t blame the race for chewing me up and spitting me out. For crying out loud, it’s a 70.3 mile race! You can have all the confidence you want, but if you don’t have the respect for the race, the distance, and the uncontrollables that will inevitably affect you, you will be crushed.

Such was my experience with St. George. A beautiful part of the country, with majestic red rocks, sweeping valley views, amazingly supportive and violently aggressive red ants (more on that later), St. George is a perfect venue for a long distance triathlon.

This was not an “A” race for me. This was just a prep race for Ironman Santa Rosa in July. Not necessarily the best choice as a prep race, as the two races are quite different. St. George has altitude, and hills, and is exposed to the sun for most of the ride and run. Santa Rosa is flat, sea level, and has a shady run. Let’s just say it wasn’t my intention to prepare for hills.

Additionally, I’ve been experiencing a lot of life changes lately, which has caused a tremendous amount of stress in my life. A recent blow of having to resign from my job (a whole other traumatic story altogether) has caused me to struggle with self confidence issues. Being thrust into full time self employment is an exciting prospect, but frightening nonetheless, especially when it comes after being morally and emotionally beaten down on the work front. This stress certainly played a role in the outcome of the race.

Anxiety can be like a carpet bomb. Even though specific events trigger it, it can begin to manifest in other areas of life as well. This is especially true if you can’t diffuse the root cause. 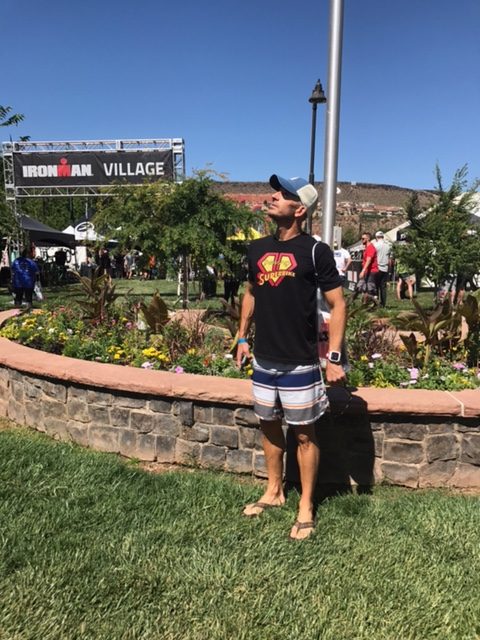 Despite my stress, it was nice to travel to this beautiful part of the country to do a race. I was amazed at how welcomed the race was in this community. At most race venues, there is always an element of the population that clearly does not support it, but I did not find that here.

The forecast called for a hot and windy race day. Since my age group would be the last to start the race, this was bad news for me as I would be feeling the brunt of it. They’ve tested out the rolling start procedure at Ironman races in the past, and it worked like a charm at Ironman 70.3 Oceanside, but for some reason they didn’t implement it at St. George. It’s my hope that they remedy this in the future, since doing the wave start with over 2,500 athletes is unsafe and unfair (in my humble opinion).

Since my wave wasn’t going off until after 7:30 am, I didn’t feel too rushed. Still, I got up around 3:00 am and had my first breakfast of 1 cup of oats, blueberries, a banana, and some flaxseed. I then did my Wim Hof breathing, and sat in my Normatec boots for about 20 minutes. We were out the door at about 4:45 for the 30 minute drive to the reservoir. I wasn’t really nervous race morning, aside from the usual anticipation that occurs with waiting to start. I set up my transition area really quickly and had about an hour and a half to wait around. I did some quick warmup sprints, but just wanted to get started. I was excited to begin, and still not really feeling any nerves.

That did not go as planned…

I had hoped to swim as well as I had at my previous 70.3 attempts, around a 32 or 33 minute swim. I had found a good rhythm in the last couple years, and my swim anxiety was behind me… or so I had thought.

As we got in the water, I lined up at the front so that I could try to hang with the fast guys for a bit. This is nothing new, I’ve done it in the past, would get dropped pretty quickly, but it kept me ahead of the second group of swimmers. As the cannon went off, all was going according to plan until I got kicked pretty hard in the head within the first couple hundred meters.

I didn’t notice it right away, but the kick busted my goggles, and they slowly started filling with water. Since I hadn’t found my rhythm yet, I had to stop and drain them. At the same time, my heart was racing and my breathing was heavy because of the initial effort I put in to get ahead of the pack.

Unfortunately, this triggered a panic attack that forced me to have to roll onto my back and calm myself down. It was a strange sensation that I hadn’t felt in many races, and never to this extreme. Even at Ironman Texas, a non-wetsuit swim, I was able to recover from my initial panic and get through.

Once I calmed down a bit, I rolled back over and kept swimming again. The goggles started filling again, and I kept tensing up, having to catch my breath every few hundred meters. I’m not sure if it was the small amount of altitude, the goggles, my anxiety, or a combination of the three, but I was prepared to throw in the towel.

Then I reminded myself that giving up because I’m afraid is not an option. Unless my safety or long term health is on the line, I will never give in to a bad day. So I kept swimming. I swallowed my pride (and a lot of water) and pushed on despite fear and flooded goggles.

The final stretch became really choppy as the wind picked up, and that didn’t help things. I had to stop a few more times to empty my goggles and collect myself. This was certainly not my proudest moment, but at least I made it through and learned a lot about how stress and anxiety can affect me during a race.

I had a poor attitude going into T1. I knew I had a bad swim, and I was unhappy that I let fear get to me. I’m not proud of how I handled it. What I should have been was thankful that I pushed through, and looked forward to the bike, but instead I was dwelling on the past.

My attitude, combined with the fact that I was behind over 2,000 athletes on the course (as a consequence of my swim and starting in the last group), caused me to overexert myself on the bike early to pass the multitudes of athletes. There really isn’t much you can do in this situation. Either you can sit back and spin and settle for a slow bike split, or you can pass, but due to the drafting rules, you can’t just stop passing when the line of athletes is literally 40 miles long.

And that’s exactly what happened. I was in passing mode for 40 miles of the race.

It was a fun course though, with lots of hills. My top speed reached was over 50 mph on one descent. The Dimond handled it flawlessly. The engine not so much!

By the time I reached the climb up Snow Canyon, at about mile 40-45, I was pretty much spent. At that time I started getting passed by quite a few people. I just didn’t have much more in me at that point, and I didn’t have a lot of heart left either.

After descending back into town, I was off the bike in just under 2.5 hours. It was already pretty hot, and the wind was picking up.

As I began the run, I already had the attitude that I didn’t want to run 13 miles. I wasn’t really sure I’d be able to make it. So I began to walk for periods of time to let myself calm down and bring down my breathing. I was reminded of Ironman Boulder, 2015 and the march of death.

The run climbs for about 3 miles before turning into a rolling course for about 7 miles, and then descends the last 3. I thought that if I was patient, my legs would come along the rollers and I would be able to charge the last three miles. That didn’t happen. I never found my legs and it just became a zombie march for me. A hot, windy zombie march.

While I’m critical of my own performance, I was truly inspired by the beauty around me. The views were phenomenal. The volunteers were excellent, and the other participants were full of encouragement.

As I slogged through the last few miles, I just wanted to finish. There was nothing left for me to execute on. My heart wasn’t in it. Just get me to the finish line was my mantra. I finally made it after 5:06 of racing. 27th in my age group.

While it wasn’t the race I wanted, it wasn’t the race I was looking to dominate. I has fortunate to finish yet another race on two legs on a beautiful course that I hadn’t yet experienced. I call that a victory. Unfortunately, I let anxiety get the best of me on that day, but I learned the lesson that I need to focus more on my mental game. I need to put the past behind me and move forward with confidence. I have it within me to be a top age grouper again, and hopefully one day even a pro. But in order to do that, I needed to regain my confidence.

Since racing St. George a couple weeks ago, I’ve been working on just that.

You can learn a lot of things from a bad race. In this one I learned that stress and anxiety in life can manifest itself at the most inopportune times and negatively affect a race. Along with the challenging nature of this course, this was certainly the case here. I was in a fearful frame of mind because of outside issues affecting my life, and it affected my attitude on race day. Fear getting the best of me.

But it won’t beat me next time.